Can’t wait, will be a great night for boxing

Frank Warren was alluding to this in an interview the other day. I think the only way it happens is if Fury looks sharp as fuck in this fight next week or whenever it is.

Either way it all looks very bad on Hearn/Joshua. Fury and Warren both saying how easy Wilder’s team have been to deal with ??

Man of his word

The last thing Wilder wanted once the Anthony Joshua fight fell apart earlier this summer was to settle for making a mandatory title defense against Dominic Breazeale next. Fighting Tyson Fury won’t earn Wilder quite as much money as he would’ve made for facing Joshua, but it’ll provide Wilder with the opportunity to defeat another big, unbeaten British star, who’s also boxing’s lineal heavyweight champion.

Wilder told BoxingScene.com on Thursday night that a deal is nearly finalized for him to fight Fury either in “November or December.” Their Showtime Pay-Per-View bout is expected to take place either on November 10 or November 17 at an undetermined venue in Las Vegas.

“Whatever date that suits us best, that’s the date we’ll go with,” Wilder said. “But people should know that this fight is happening. It will happen. We just can’t wait. We can’t wait to announce it and get it on.”

After frustrating failed negotiations with Eddie Hearn, Joshua’s promoter, Wilder has been pleasantly surprised with how quickly his adviser, Al Haymon, his co-manager, Shelly Finkel, and Frank Warren, Fury’s promoter, have moved toward completing contracts for what will be the biggest fight of the Alabama-based knockout artist’s 10-year pro career.

According to Wilder, that’s a testament to Fury’s fearlessness. The 6-feet-9 former champion isn’t as big a star in the United Kingdom as Joshua, but he, too, could’ve demanded that the 6-feet-7 Wilder travel to Fury’s native England to make more money than Wilder could earn for fighting anyone other than Joshua.

“I respect for him and I salute him for that, for trying to save face for his country, to try to save them from the embarrassment they feel over there,” Wilder said. “Because we’re laughing at them hard, especially when Joshua asked for $50 million and then talked about he was just playing. But Fury, he’s a true champion. This is what champions are all about.”

Joshua (21-0, 20 KOs) is preparing for a mandatory defense of his WBA title against Alexander Povetkin (34-1, 24 KOs) on September 22 at Wembley Stadium in London. That fight could draw a capacity crowd of roughly 90,000. 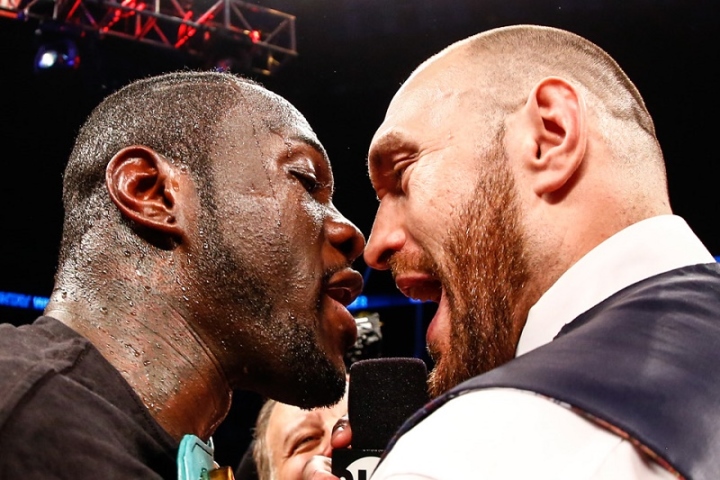 Wilder was willing to fight Joshua at Wembley Stadium, but he is very satisfied with an intriguing, surprising Plan B he hadn’t even considered in the immediate aftermath of the Joshua negotiations ending.

“This is a bigger fight than the Joshua fight,” Wilder said. “This is a way bigger fight. Just for Tyson to take this opportunity, and be able to do [a deal] in a short amount of time, it tells you about his character. He’s a true warrior. He’s a true gypsy king and I can’t wait to share a ring with him.”

While Wilder (40-0, 39 KOs) clearly would make more money for fighting Joshua, he considers the Fury fight bigger because Fury (25-0, 18 KOs) is the lineal heavyweight champion and more well-known among American boxing fans than Joshua.

“Fury’s undefeated and he beat the man that beat the man,” Wilder said. “We all know this. So, you know, a lot more people over here in America know Tyson Fury than they know Anthony Joshua. When people hear about this fight and when I walk the streets, they go, ‘That’s that guy that stepped in the ring with you when you fought [Artur Szpilka in January 2016].’ They remember his face. They remember him.

“And now we’ve just caused a big uproar, now that me and him is finally fighting. With our styles, it’s gonna be crazy in there. We’re two awkward guys. We’re big, we’re undefeated, we’re true champions and most of all, we can talk. We speak our peace. It’s easy to see this fight is way bigger than the Joshua fight.”

The 32-year-old Wilder intends to attend Fury’s next fight, set for August 18 in Belfast, Northern Ireland. If Fury defeats Italy’s Francesco Pianeta (35-4-1, 21 KOs) in the second fight of his comeback from treatment for alcoholism, drug addiction and depression, the Wilder-Fury promotion will begin inside the ring that night at Windsor Park.

Wilder isn’t concerned that any of the 29-year-old Fury’s personal problems will lead to a postponement once their contracts are finalized for a November bout. He has spoken privately several times to Fury and is convinced their fight will come off.

Wilder isn’t worried, either, that he’ll be criticized for facing Fury in just the third bout of his comeback from a 2½-year layoff that followed his upset of Klitschko (64-5, 53 KOs).

The way Wilder sees it, Fury never truly lost the IBF, IBO, WBA and WBO titles he won from Klitschko in their November 2015 bout in Dusseldorf, Germany. Joshua now owns those four belts, but that doesn’t matter to Wilder.

“I’m ecstatic,” Wilder said. “I’m so excited and I deserve it. I done been through hell in my career. None of the best ever wanted to fight me. None of the best ever wanted to give me the opportunity to prove that I’m the best, like I say I am. It makes me look like I’m an American who just runs around here, talking a lot of sh*t. But I’ve been ready and I’ve been willing to prove to the world that I am who I say I am. And now I get the opportunity. I got a blessing, an opportunity that just fell out of the sky for me. I can’t wait for this fight.”

Warren’s made a mockery of Sky tonight       beautiful stuff